Our city is – and must be – for all people, regardless of gender, age, colour, disability, religion, sexuality and gender identity. 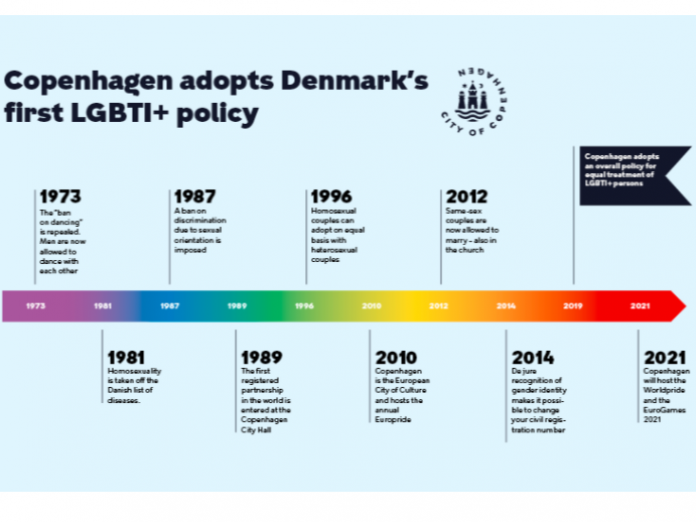 This is both a fact and a promise. In Copenhagen, one must be able to live the life one wants and be the person, one is.

Introduction to the foreword by Frank Jensen, Lord Mayor of Copenhagen.

Copenhagen, the capital of Denmark, ranks high among the major cities of the world regarding the rights LGBTI+ people (lesbians, gays, bisexuals, transgender, intersex people and people belonging to other sexual and gender-related minorities) enjoy in the society and the level of acceptance they experience among the general population.

However, there are still significant issues – also in Copenhagen – regarding health, well-being and non-discrimination of LGBTI+ citizens and employees. To address these issues and seek solutions for them, the Copenhagen City Council has decided to adopt the present LGBTI+ policy, valid for the period from 2019 through 2023.

The policy consists of a foreword by the Lord Mayor of Copenhagen, an introductory chapter describing the overall objective of the policy, individual chapters describing relevant circumstances and initiatives within the areas of each of the City’s seven administrations, a closing chapter describing the future perspective and, finally, a timeline of events in Danish LGBTI+ history.

With effect for the whole city, it is planned that a communication guide on gender-neutral language will be compiled. Furthermore – with the aim of contributing to a focus on the City of Copenhagen as an LGBTI+ inclusive employer – the project “Empatisk Arbejdsmarked” (“Empathic Labour Market”) in the organisation LGBT Denmark will be invited to give a presentation for the City’s Central Cooperation Committee.

Below is a list with examples of initiatives directed towards certain areas or groups of people in the City:

Profile Nursing Home: Since 2015, the nursing home “Slottet” has a rainbow profile. The nursing home, which is for all people, regardless of gender, sexual orientation or gender identity, has its focus on LGBTI+ residents. Among other things, special courses on LGBTI+ issues have been carried out for the employees of the nursing home.

Healthy Mega-event: The mega-event, Copenhagen 2021, comprised by WorldPride and EuroGames, will be given a healthy twist as the Health and Care Administration plans to reduce visible smoking, promote mental breathing spaces and support safer sex in connection with the event.

CheckPoint: In cooperation with the Danish AIDS Foundation (AIDS-Fondet), men who have sex with men are offered a free and anonymous test for HIV, syphilis, chlamydia and/or gonorrhoea at the clinic of the AIDS Foundation, CheckPoint.

Knowledge on LGBTI+ Issues among Employees in the Social Home Care: The Social Services Administration will conduct an after-work meeting for staff and management of the social home care with participation of relevant persons from civil society organisations, e.g. the organisations LGBT Denmark and Intersex Denmark.

Safe Accommodation: All refugees are as a main rule temporarily accommodated at a central refugee house in the district of Valby. If there are cases of LGBTI+ refugees feeling unsafe there, they will be offered accommodation in an apartment elsewhere in Copenhagen.

It is to be noted that some of the initiatives are already financed, while other initiatives can only be carried out if separate financing is obtained, e.g. through one of the City’s annual budgets.

During the policy’s period of validity, the City of Copenhagen will have a continuous focus on the conditions and well-being of LGBTI+ people living in and/or employed by the City. The City has committed itself to strengthening the cooperation with the LGBTI+ civil society regarding both general cooperation as well as the specific work concerning the policy.

At the end of each year, a status on the implementation of the policy will be presented for the Finance Committee of the City. Toward reaching the end of the policy’s validity period in 2023, a final evaluation of the policy, will be prepared under involvement of LGBTI+ organisations and presented for the City’s Finance Committee as well as the City Council. In that connection, it will also be decided whether an LGBTI+ policy for a new period will be made, or if the work on strengthening the conditions of living for LGBTI+ persons shall be promoted in other ways.